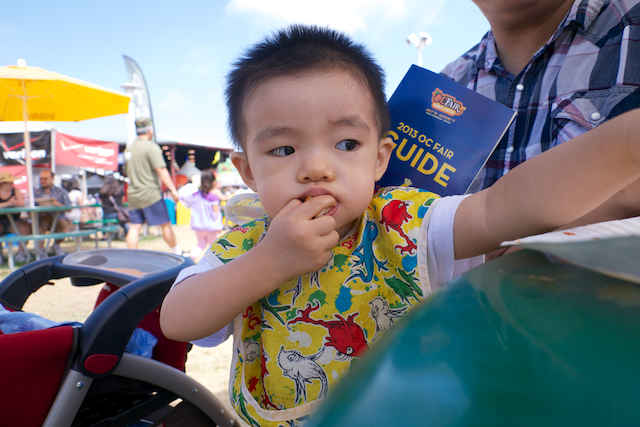 It was Daddie’s idea to go to the OC Fair.

A new experience for Aiden.

He had a great appetite – eating over 90% of the pizza.

He really is trying to be a big kid.

So we let him have a few bites from the pizza without cutting it up.

Success – even if it bite-size.

When I cut up strips for him, he would stuff it in his mouth.

He was being a prince – eating one corn kernel at a time.

Standing up to get a better view.

He barely walked around.

And we had a transportation machine for him and the stuff we brought.

Aiden’s hands are too fast – touching the cage.

We didn’t play any games though.

We just checked out the animals.

To watch animals, he drank a whole bottle on his own!

Though Aiden rarely plays with blocks, he’s actually been stacking it up pretty high.

Daddie came home one day thinking it was Mommie’s doing.

We tried to get Aiden to open up the party favor.

But he mostly just took the boxed gift in and out of the bag.

And be the transporter that he is.

And of course, off to Costco he goes!

It will be a busy August for Aiden and us.

When we went to service the car, Aiden was ready to test drive the cars.

Not yet Aiden, not just yet!