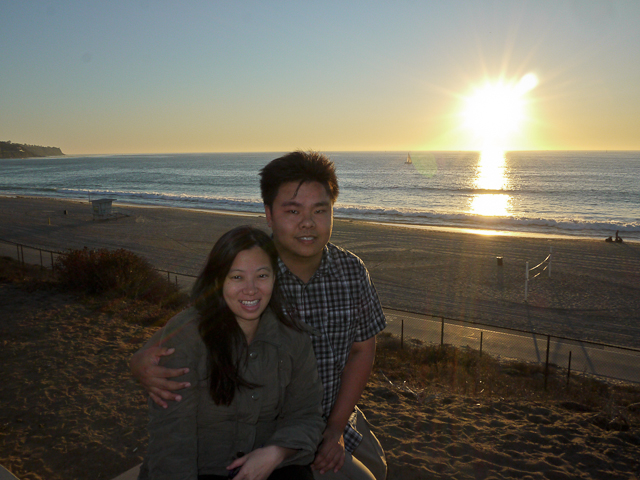 Poor Papa Ma, has to go to Doctor’s office with me today on his big day!  To protect his wifey, me, from fainting after the big tests, we had to stop by 85 degrees for some snacks.

Glad to see that it’s not packed like the Irvine location. 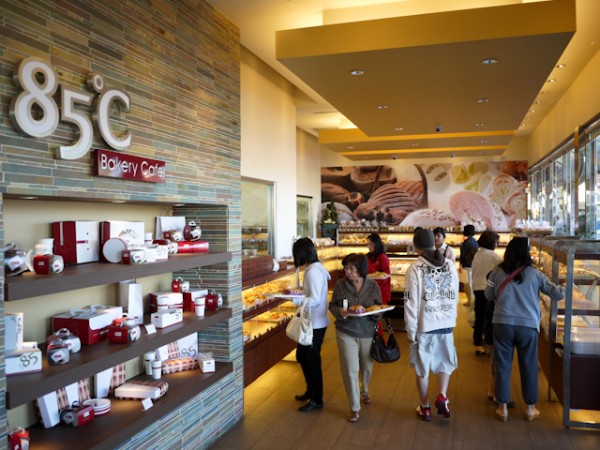 But don’t get their cake!  It is so not tasty! 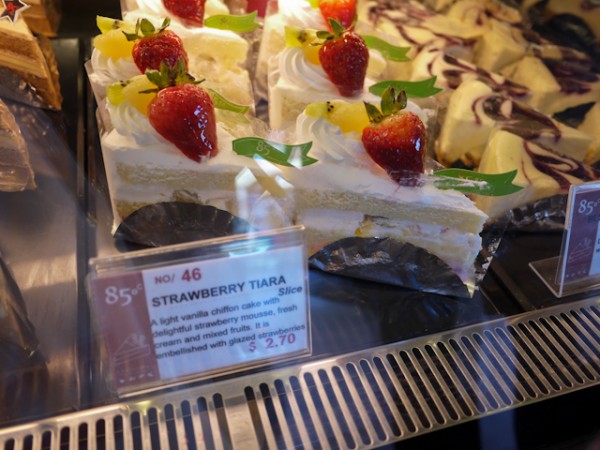 Goodness!  One bad thing after another.  The nurse at the doctor’s office forgot the key.  We honestly feel that it was pass the time for the test, but she just did it any way to not look bad 2 times in a row.  So the doctor said that if the tests is abnormal by just a little bit that he will note it, if it’s off by a lot then those extra minutes will have no affect.  So I should know by next Saturday………. 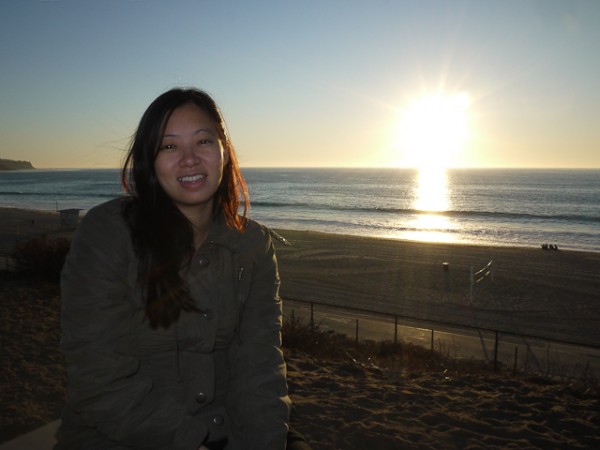 After Doctor’s office we went to eat at Jin Jiang for his crab/pork dumplings, a 70-minute massage for Mr. Ma, shopping, and then Redondo Beach just for a few pics before dinner time. 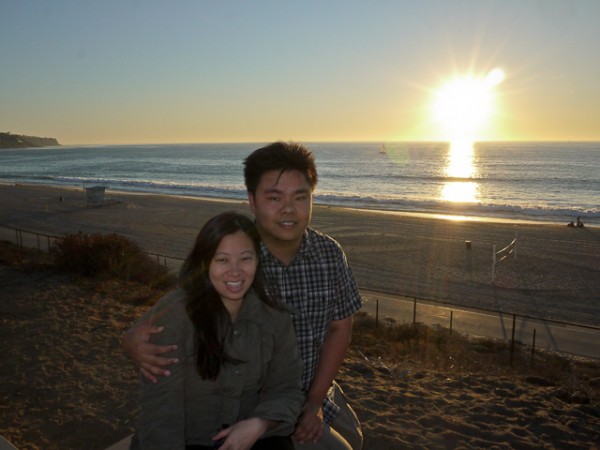 Rare occassion bor.. Mr. Ma asked someone to help take a pic for us! 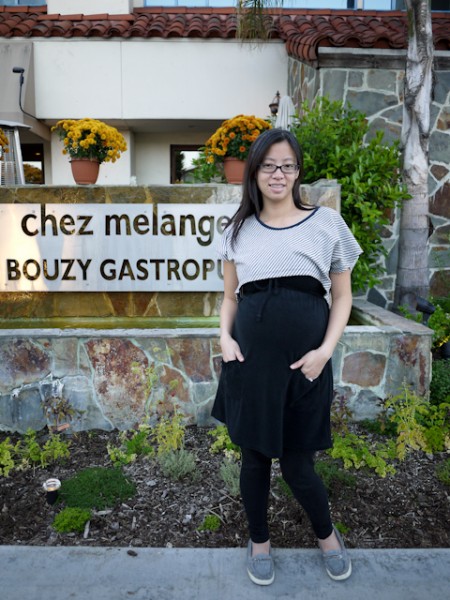 This is the place I chose for his birthday dinner! 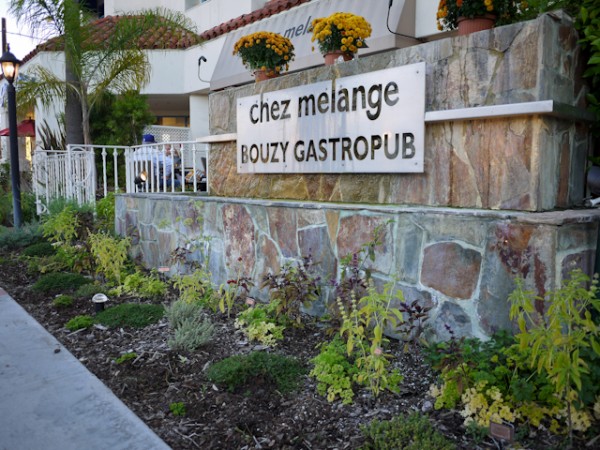 If you like to sit outside, there’s a nice warm environment that Mr. Ma said is furnished with Ikea Furniture. 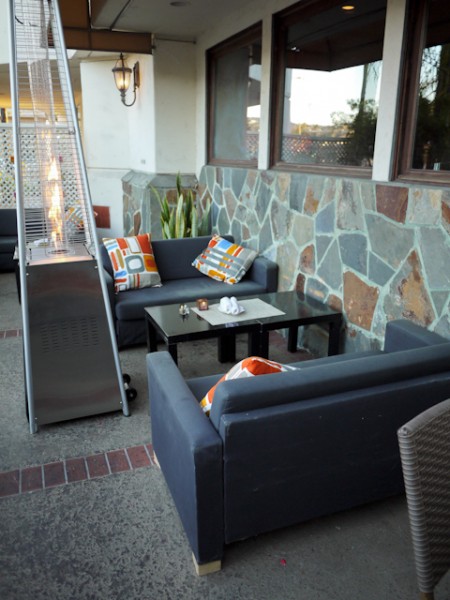 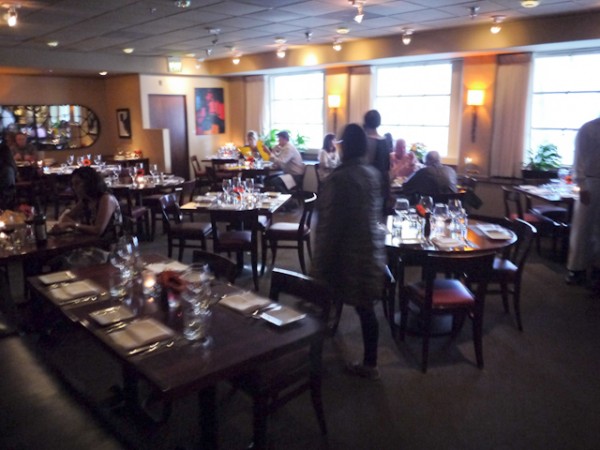 Our reservation was at 6:30, looks empty but not long after that tables were filled. 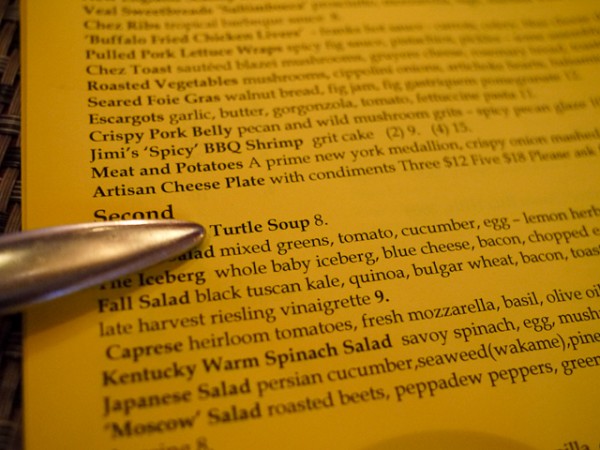 The menu for today!  I didn’t try the bread or use the bean dipping sauce, but I had potato chips! 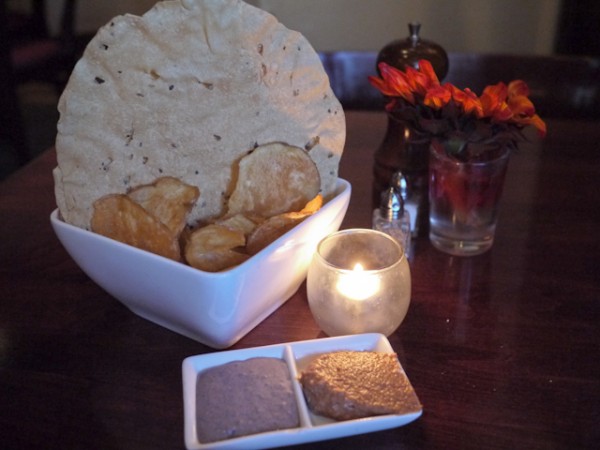 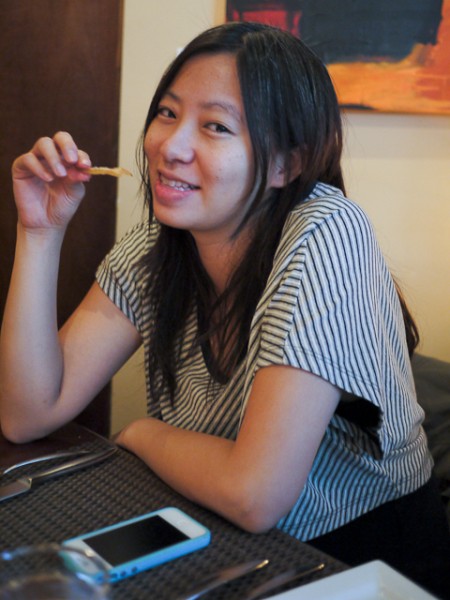 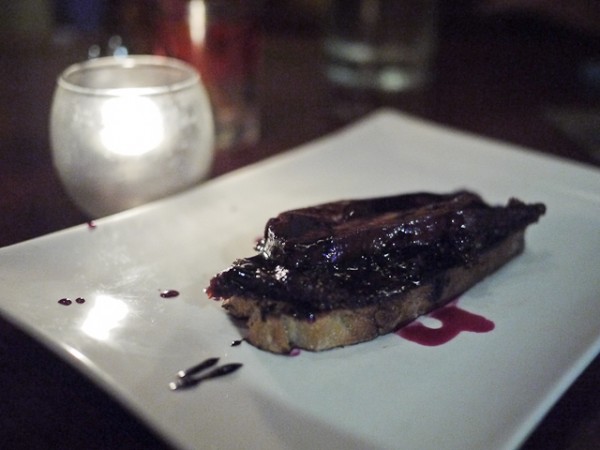 We were very disappointed with this dish!  We told the waiter, and later the boss came out!!!! :X 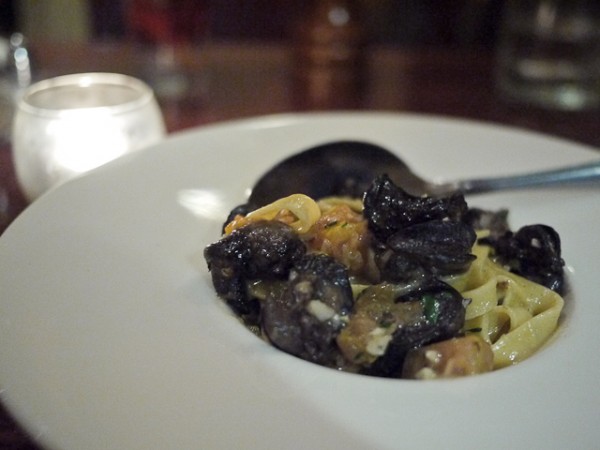 Mmmmm….the escargot dish was the best dish for me! 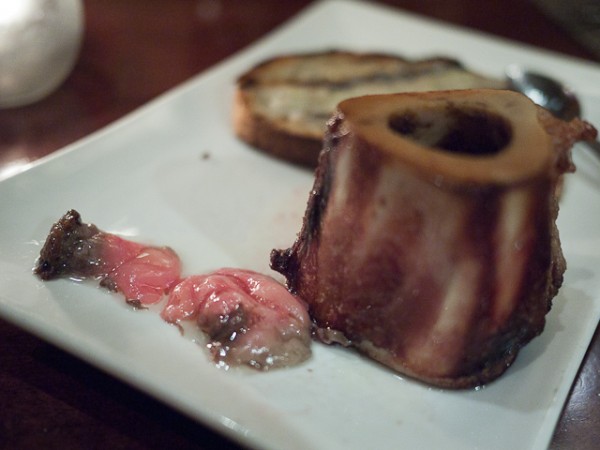 But the bone marrow we had to cancel!  Not even cooked! Totally killed our appetite! 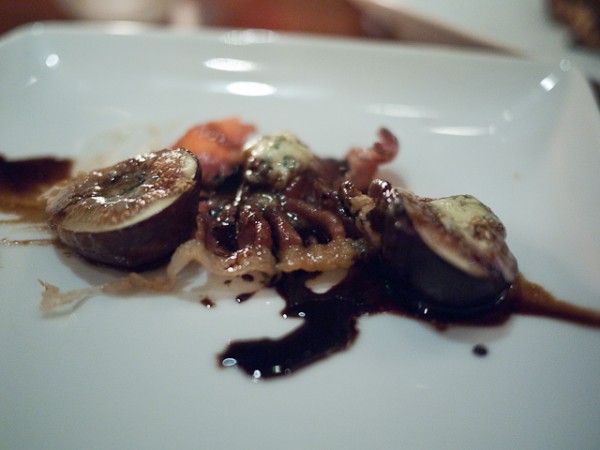 I think the owner felt bad, as he came out with figs on the house!  I felt so bad, I had a little but fig is not my thing.

Galen was so much more supportive!  He had 2, he said it tasted like eggplant. 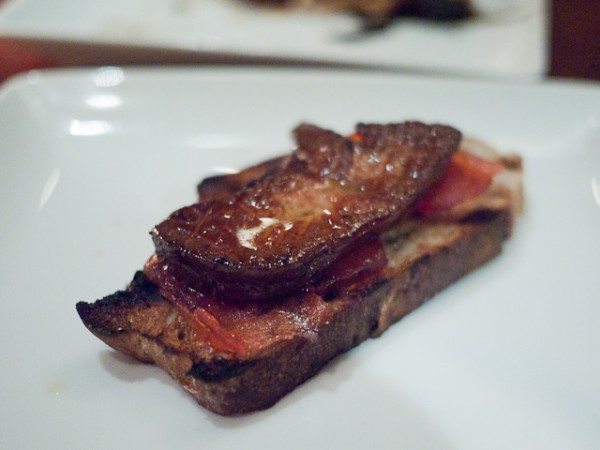 After asking us why we didn’t like the first foie gras dish, the owner came out with another foie gras dish.  He removed the jam spread and used membrillo instead, a Spanish Quince Paste.  This was definitely a lot better.  It’s the first time that an owner actually listened to suggestions and made changes so that the customers would be happy.  Give a star for this!

A little overcooked.  I think I am just more used to the asian way of cooking fish, so fish has to be cooked to perfection for me to really say “GOOD!” 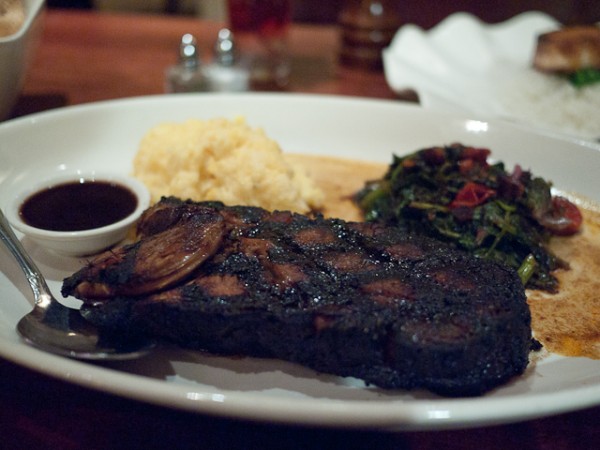 I wasn’t too into this dish, but GM finished almost all of it, just not the burnt parts. 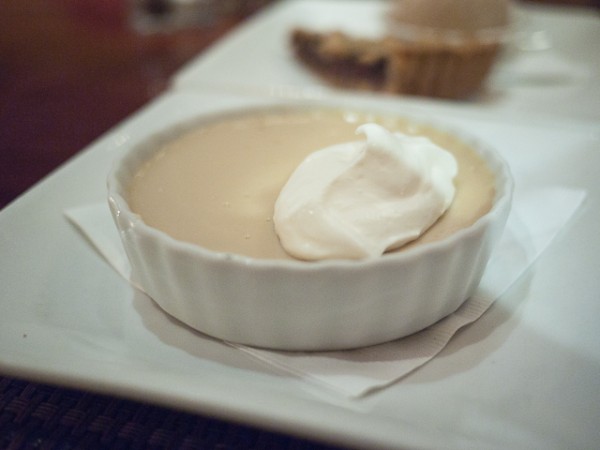 We decided to skip dessert!  But the owner was so nice and desserts were on the house!

Salted Butterscotch pudding.  At first it was too salty to taste but then afterwards I found the way to eat it.  Small bites!  I was too full otherwise I would have finished the whole dessert. 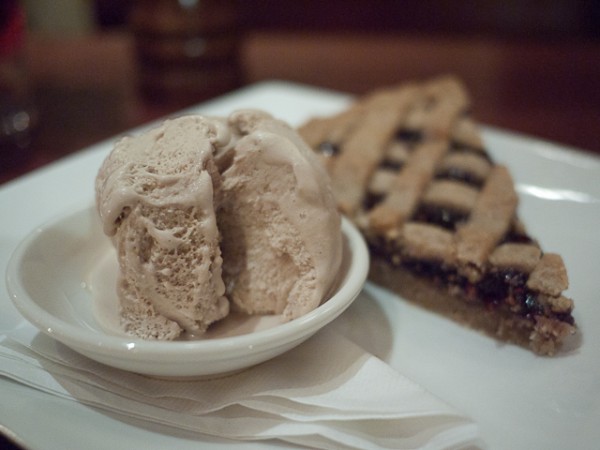 Then there was the hazelnut ice cream and the pie (which I didn’t touch).  GM said their dessert is better than their main course. 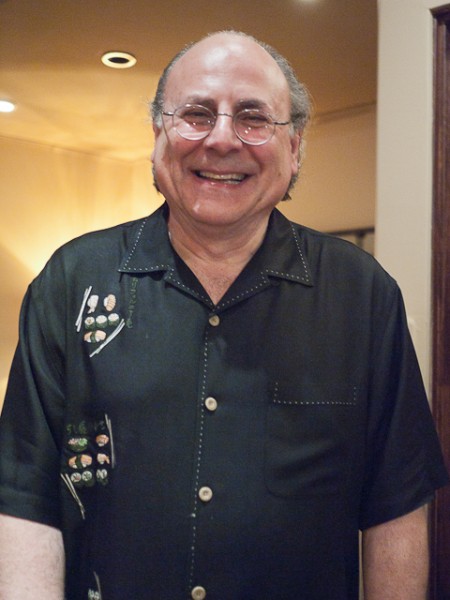 This is the super friendly owner.  I have to say the owner redeemed any negative thoughts I had about the restaurant! 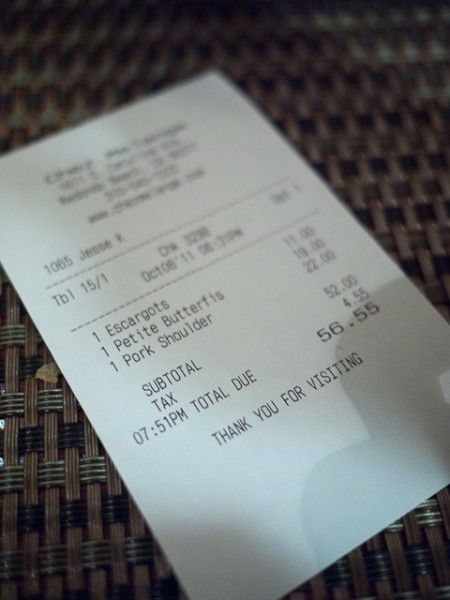 I felt like I ate so many dishes but that’s all we ended up being charged for!  Whew!  I didn’t totally bring all my bad luck to Galen! 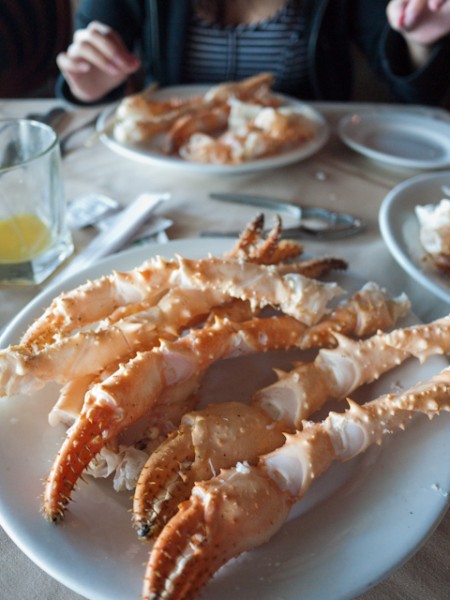 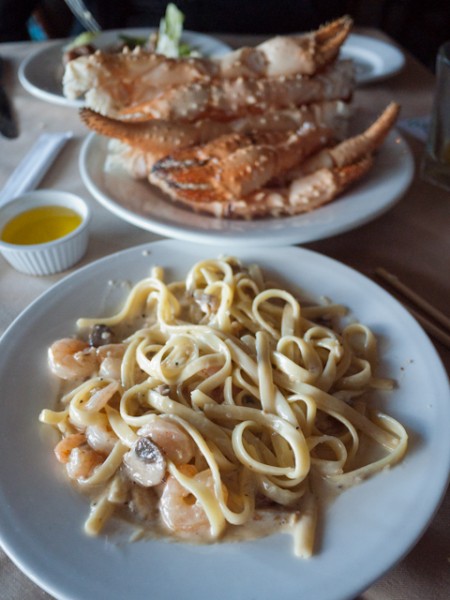 They even make pasta for you, and put in ingredients you want!  He had two plates of king crab legs! 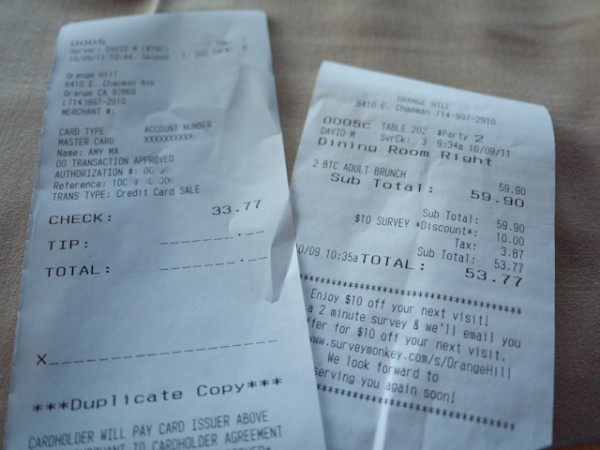 With a $10 survey coupon we got from Orange Hills, and also a $20 voucher from Opentable.com, it brought the price down to $33 only, good deal, two brunches for the price of 1!  And after brunch…more shopping! Mommy and Aiden got more goodies!

Today, mommy even gave up the last drawer so that we can store supplies for Aiden later on! What a busy weekend!

PS.  It just happened we passed by the Irvine 85C Bakery today, look at the line of people waiting to get in.  It’s CRAZY!  What a difference from the Hacienda Heights location! 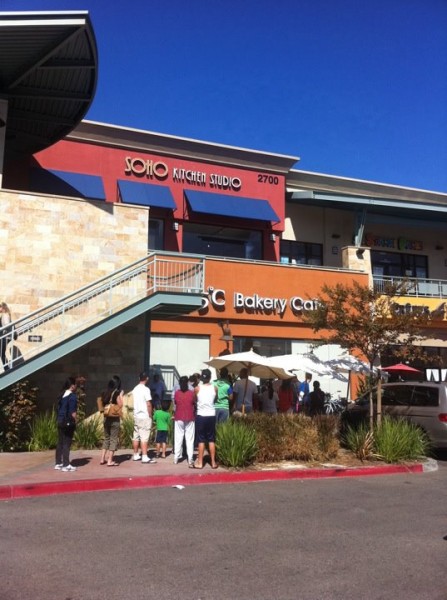