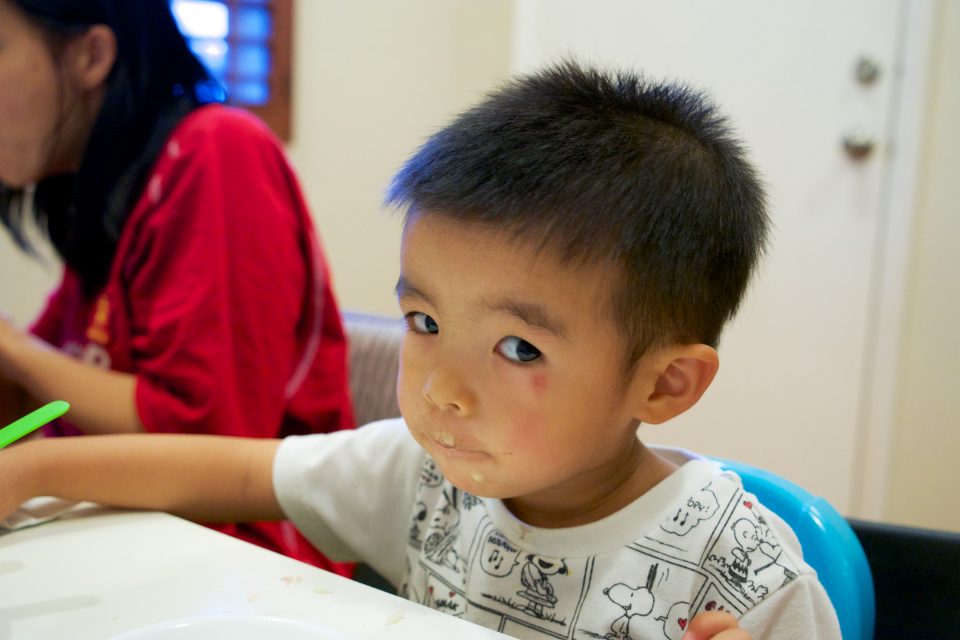 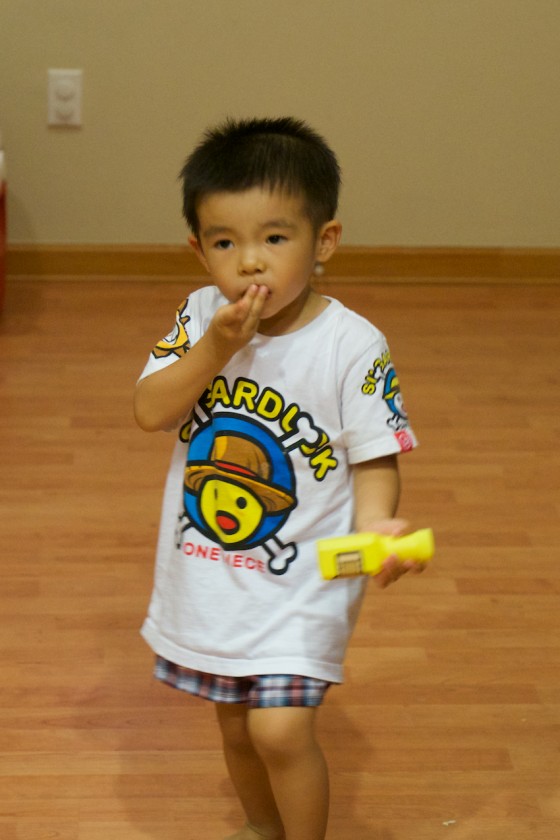 Of course he’s had an accident here and there – 2 times when Daddie was lecturing him about some other issue.  Daddie believes Aiden did it on purpose. 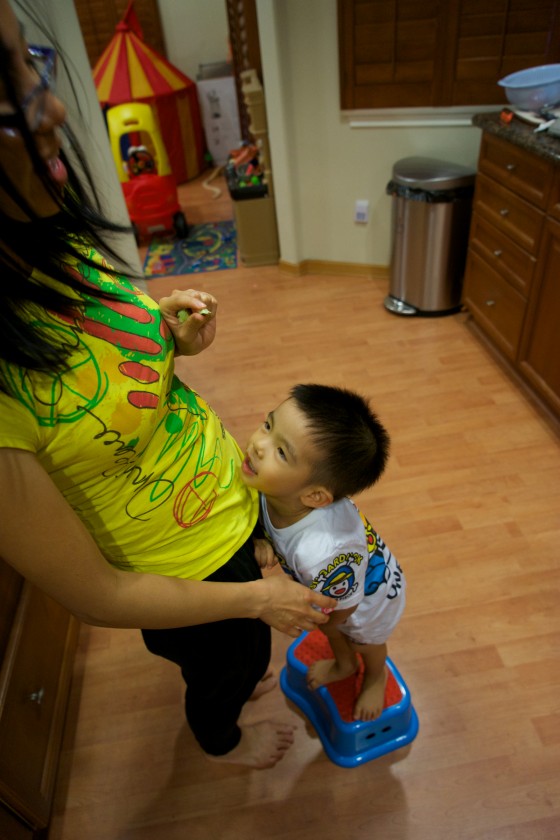 The accidents happen more often at school, because Mommie and Daddie don’t want to clean up his mess. 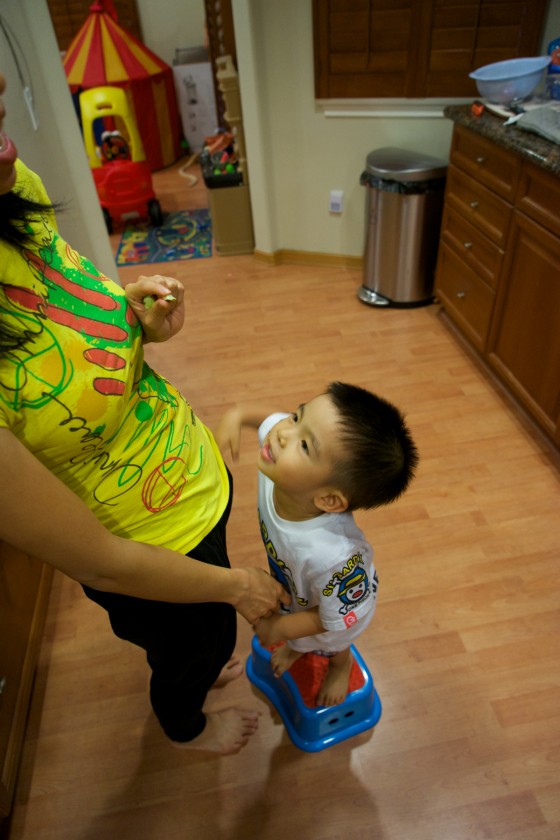 One time we were very lucky that he didn’t pee at all during the night because we forgot to put diaper on him.  These days, his diapers were often dry when we pick him up from his crib in the morning. 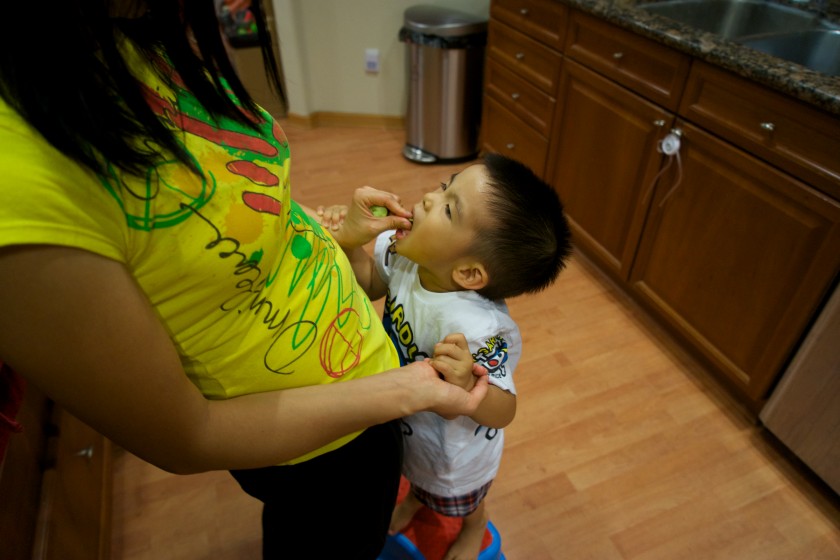 Another time we went out to dinner and forgot as well.  Daddie found out during dinner and took Aiden to the bathroom right away. We went to another store nearby to buy drinks afterward, then head straight home just to make sure our trip was short.  Then it was earlier today, Aiden said he needed to go pee pee while we were stuck in traffic.  We got home 15 mins later, and his diaper was still dry.  He ran to the bathroom immediately.  This was the first time we found Aiden could hold his pee for so long. 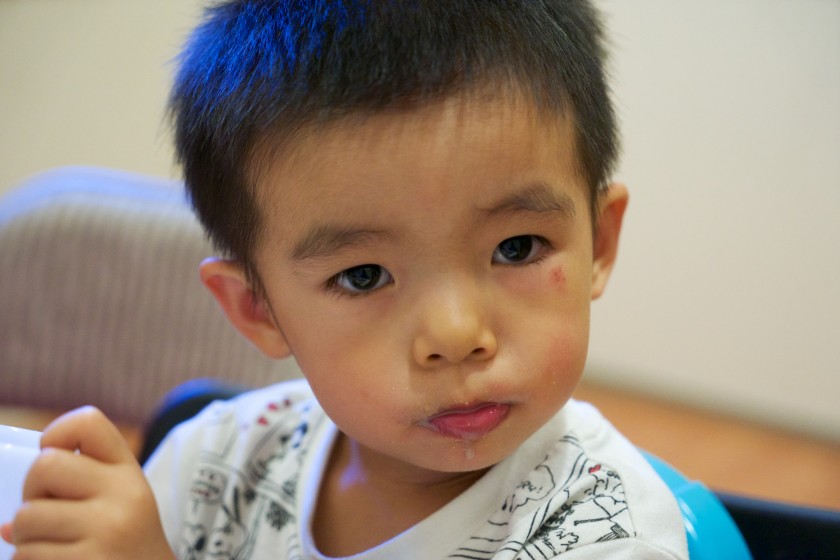 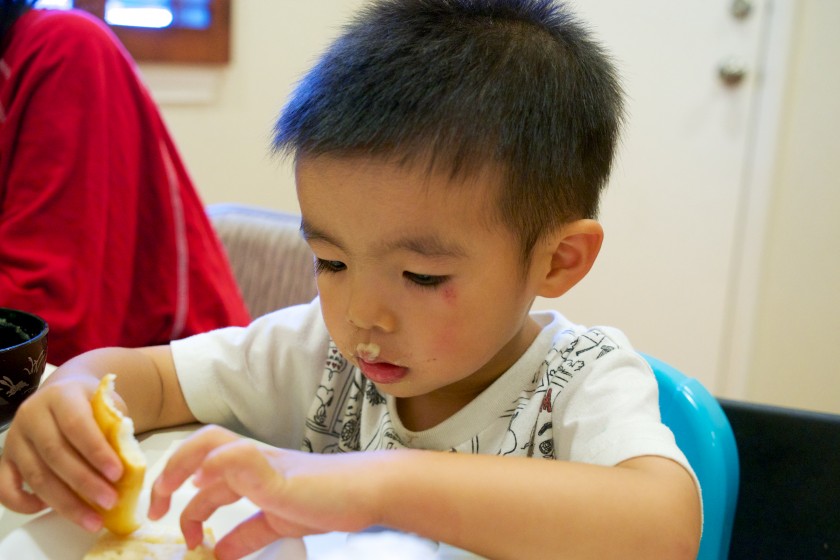 Aiden had rug burn by his eyes and bruised his cheek a bit because he was running and fell down a few steps at the stairs. 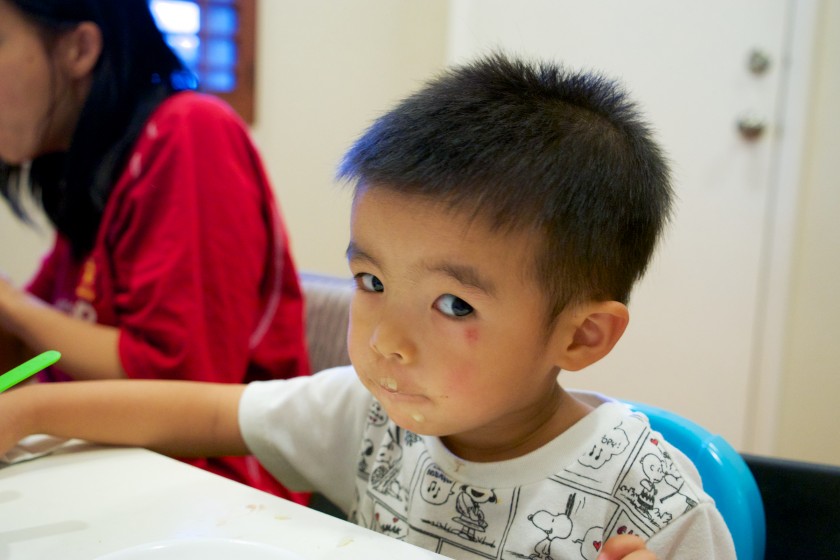 I heard a loud thump, saw him on the stairs laying across 4 steps or so, head hanging down. 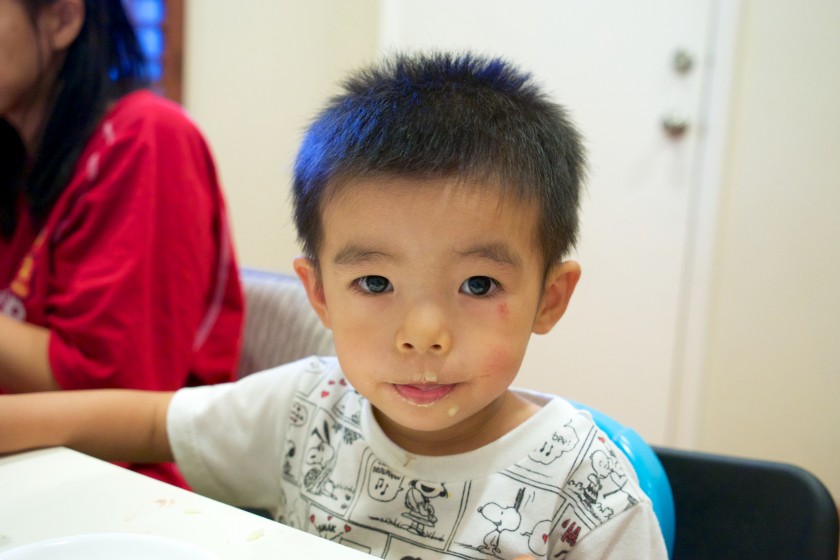 Daddie was there with Aiden and Aiden just cried and cried. 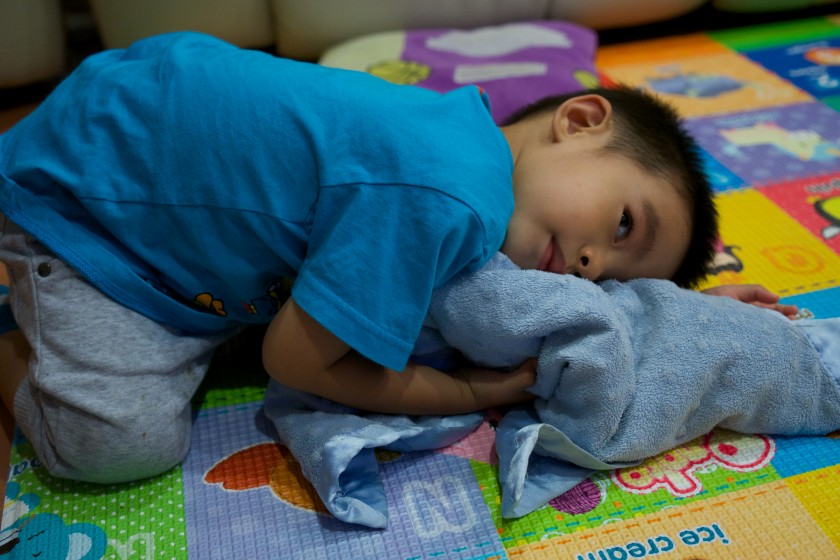 We made sure he was alright, then reminded him what he shouldn’t do by the stairs. 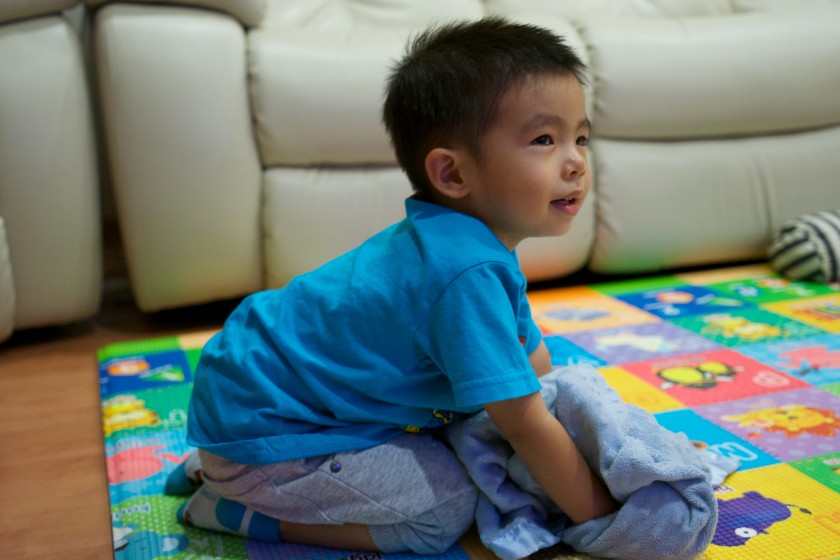 And then the other morning he threw Daddie’s Bobble Head Dumpling kid on the floor and broke its hand off. 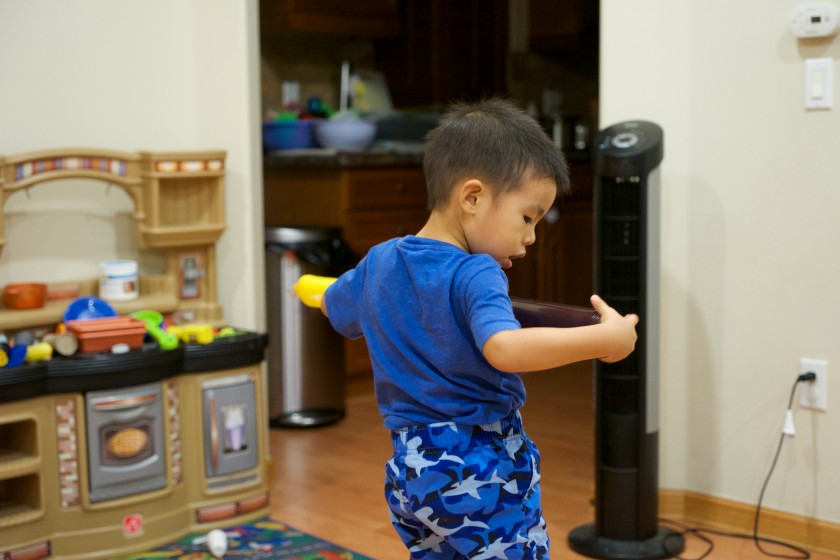 He went to his time out spot without a fight, so he definitely knows what he did was wrong. 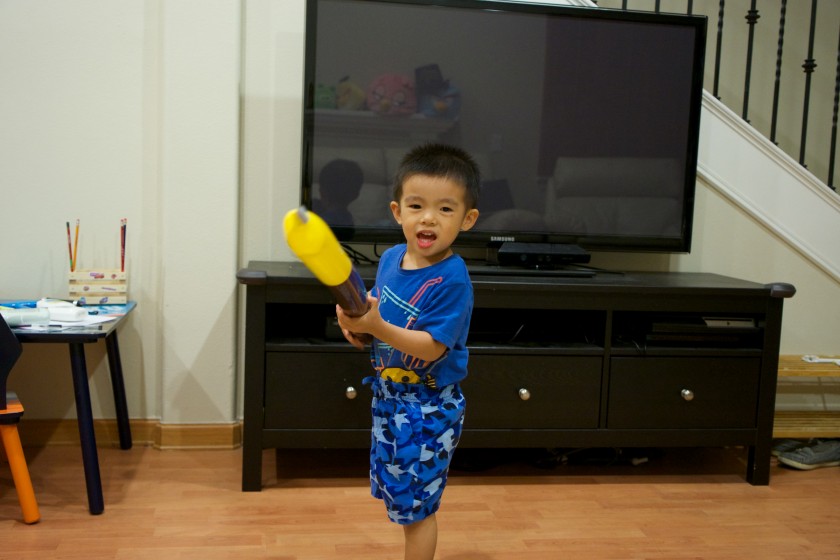 It’s funny though, when I pick him up from school he gives me a short report of his school day which consist of he didn’t fight today, what he ate, and if he went to the bathroom at the toilet. 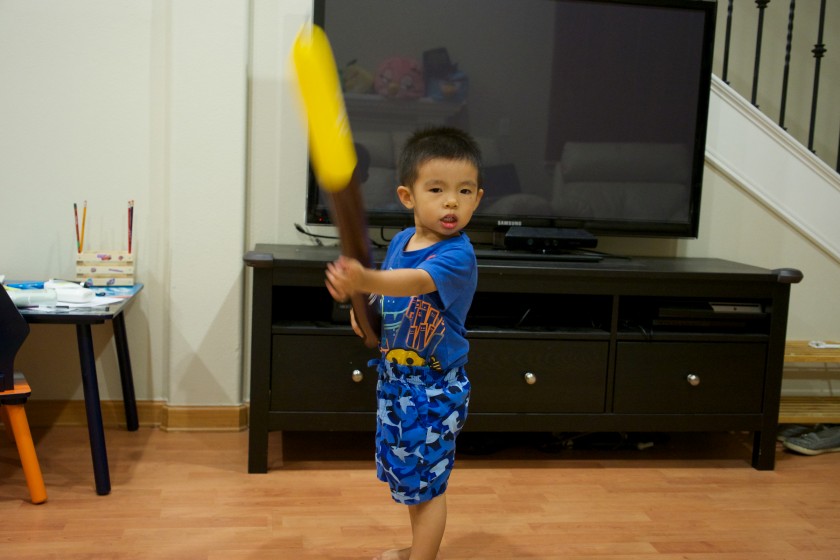 Recently we visited 公公婆婆 at the Donut shop.  Grandmama gave him 2 pieces of chocolate donut holes. After finishing one and two in his hands, he even told me he was done. But I noticed no matter how many he ate he still had the same amount of “whole” donut holes in his hands.  We found out that when he knew he wasn’t allowed to keep eating more, that he would just switch them out as he ate up all the chocolate.  Sneaky!!!