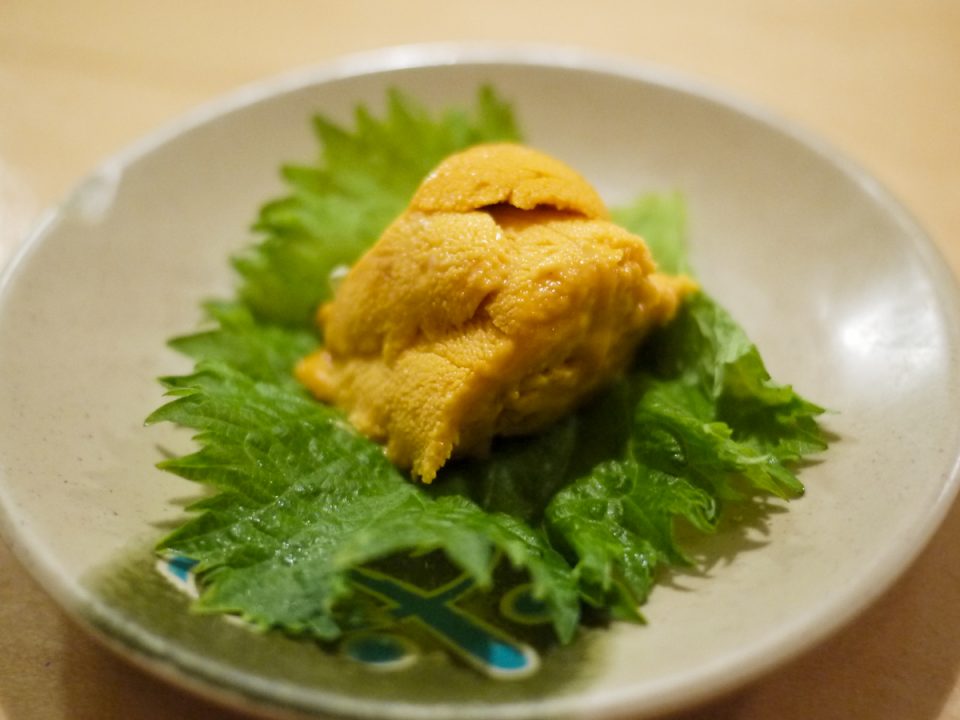 TVB has a new drama  魚躍在花見 ( The Rippling Blossom ) about the journey of two brothers fighting to be the top sushi chef; ever since watching all those mouth watering sushi dishes on TV, Amy and I have been craving for some good sushi since the drama started.  (And of course the wifey wants to play a part in the movie and be the connoisseur.)

Unfortunately, last week a re-visit to Sushi Wasabi was a big disappointment (compared to our first encounter for Valentine’s Day dinner), we decided to hunt for a better sushi joint this time.  After doing some research, we found Sasabune.  Sasabune’s owner/chef Nobi is also the sensei (teacher) of chef Katsu who now is the owner of Sushi Wasabi.  Both restaurants have some similar dishes for their Omakase course; however, the quality and freshness of Sasabune’s dishes are far superior.  And not to mention the sufficient/efficient waitstaff service at Sasabune compared to only 1 sushi chef and 1 waitress at Sushi Wasabi.  After dinner at Sasabune, we no longer have any interests in going to Sushi Wasabi again. 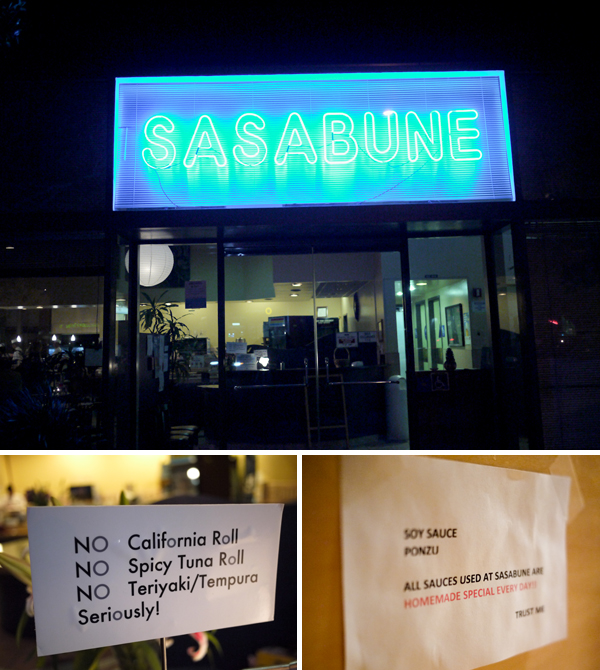 Sasabune a.k.a “the trust me sushi”; you won’t find the Americanized sushi here.  Their back to basics sushi with special homemade saucse will definitely enlighten your taste buds.

Baby Blue Fin Tuna (Honmaguro) – This first dish definitely  gave us a nice surprise with its marbling fat distribution, it tastes so fresh and sweet. 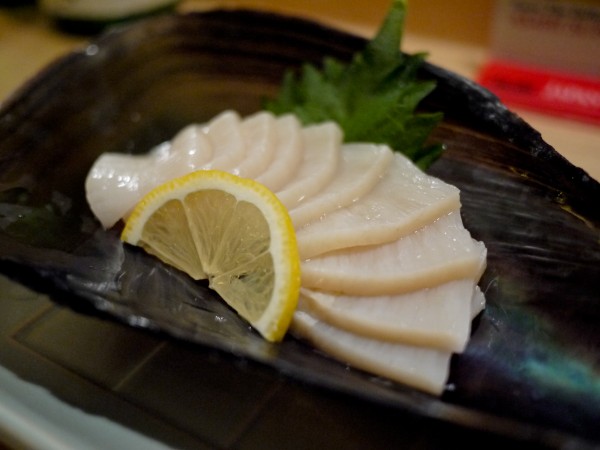 Pen Shell (Tairagai) – has a very crisp texture , and the taste is similar to abalone sashimi.  They have a special pink salt and yuzu kosho (chili pepper, salt, and yuzu) that you slightly rub on the sashimi.  We both prefer it without the salt, and feel the salt takes away the flavor of the pen shell. 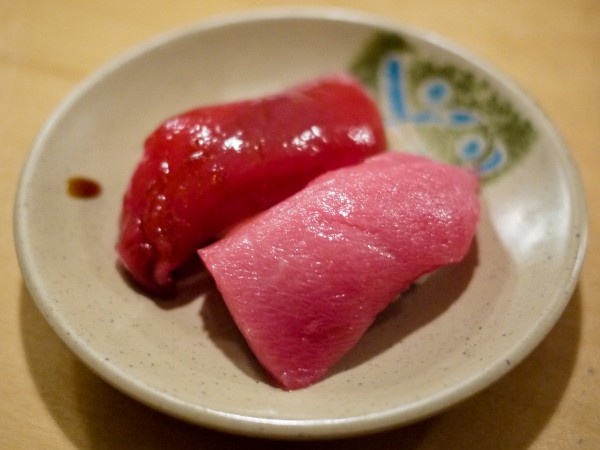 Blue Fin Tuna (Maguro) / Fatty Tuna (Toro) – Freshness is the keyword here.  The toro is so smooth.  In seconds, it seems to just dissolve in my mouth!  Spreading its sweetness throughout!  Another nice surprise is the sushi rice, served warm!  (Ah, I forgot to mention they are well-known for serving sushi with warm rice.) Like these sushi, all the other dishes were served with just enough sauce, unlike Sushi Wasabi which is drenched with ponzu sauce. 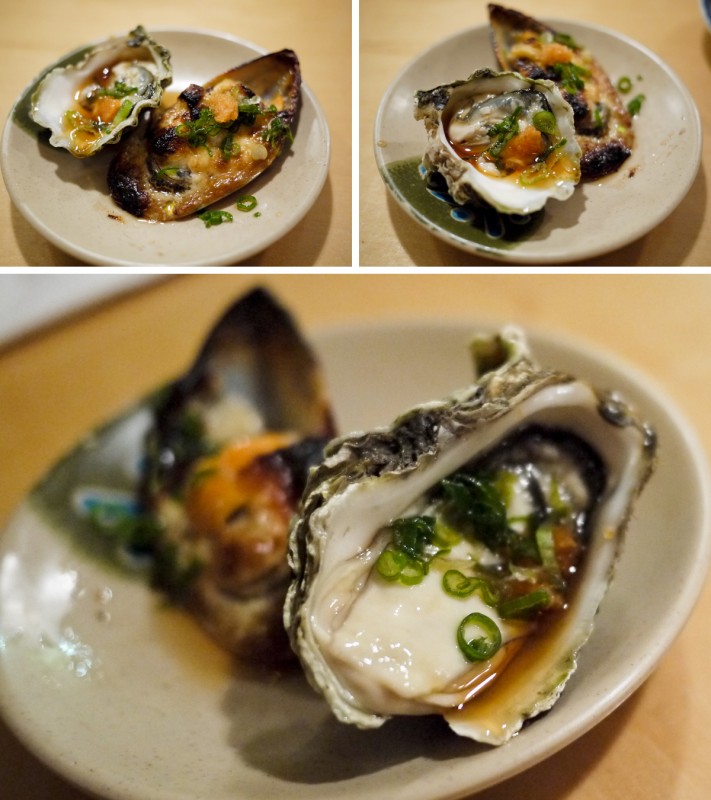 P.S. wifey always complains about how I usually get special treatment at sushi restaurants, look at how big her oyster is compared to mine (bottom pic).  =(

Yellowtail (Hiramasa) / Salmon (Sake) – We had a similar one at Sushi Wasabi, and of course these two pieces are way better. 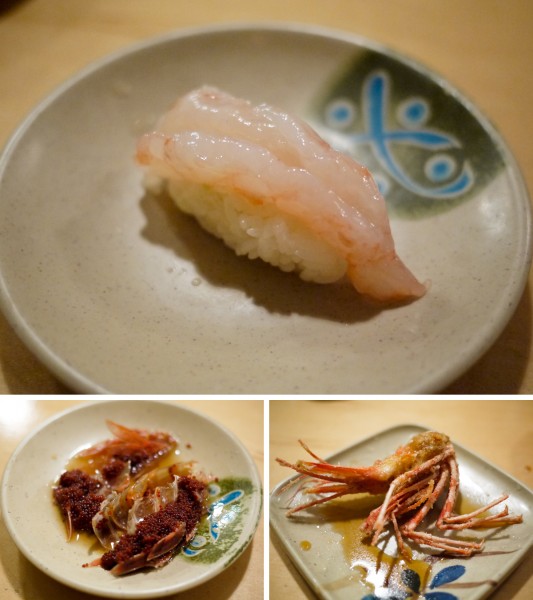 Sweet Shrimp (Amaebi) / Sweet Shrimp Roe / Fried Shrimp Head – The sweet shrimp was very sweet.  The two dishes after it though was a little off.  The shrimp roe had lemon or some type of citrus liquid on it that was very overpowering.  So even though the fried shrimp head was lightly drizzled with a slightly sour soy sauce, all that could be tasted was the sourness.  Of course I was smart enough and gave my shrimp roe to the wifey so I didn’t have that problem.

Geoduck (Mirugai) / Orange Clam (Bakagai) – First time having geoduck sushi and it was surprisingly good, both sushi were very crisp and the orange clam was topped with some sea salt to bring out its flavor.  Two thumbs up.  We both agreed that the orange clam was the preferred sushi as it was sweeter and we enjoyed the texture of it as well.

Mackerel (Saba) / Spanish Mackerel (Sawara) – I’m not a big fan of any mackerel type of fish, however these two definitely made my mouth drop.  Yum Yum.  The Saba is slightly saltier than the Spanish mackerel.  So it depends on your taste buds.  I liked the Saba, and the wife – the Sawara.

Salmon Roe (Ikura) / Sea Urchin (Uni) – I personally think the salmon roe was way too salty, though the uni was top-notch.  (Suggestion: eat the Ikura first, that way it won’t appear as salty, and the uni will appear sweeter.

Fish Liver (Ankimo) / Freshwater Eel (Unagi) – The melt in your mouth ankimo served warm along with the fatty unagi topped with Sasabune’s special sauce and roasted sesame seed.  The unagi sauce was quite subtle (unlike most eel sauce in the U.S. which are on the sweeter side) and it taste very similar to the one we had at Kyoto.  Click here for picture.  The ankimo texture here is a melt-in-your-mouth feel like foie gras. 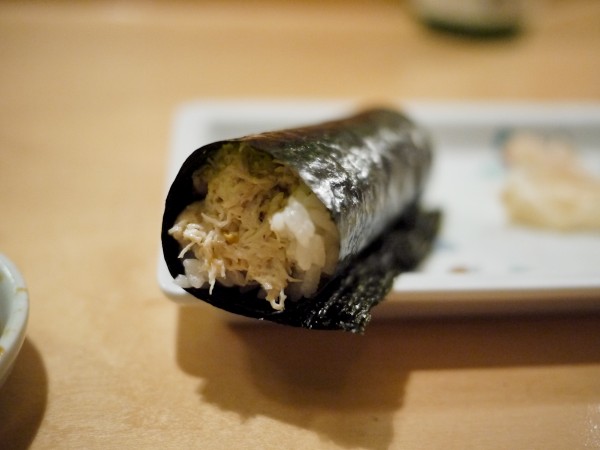 Blue Crab Handroll (Kani) – A MUCH MUCH better version than the one at Sushi Wasabi, this one has less mayo sauce and the blue crab meat flavor was more evident.

Albacore Tuna (Shiromaguro) / Scallop (Hotate) – Tender albacore with the scallop amazed us.  The albacore is more marble and seems to melt away upon it the touch of my mouth, while the scallop (a bit softer than the pen shell) was very refreshing. 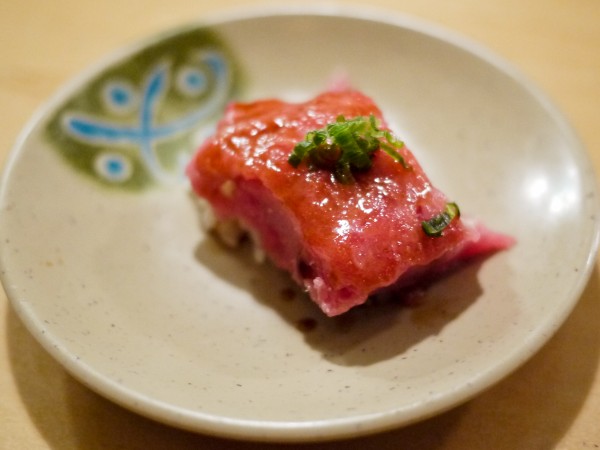 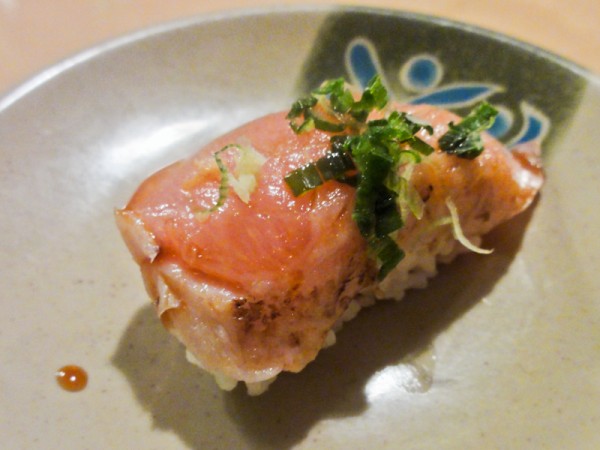 Golden Eye Snapper (Kinmedai) – good, but a forgotten piece amongst all the treasures of the night. 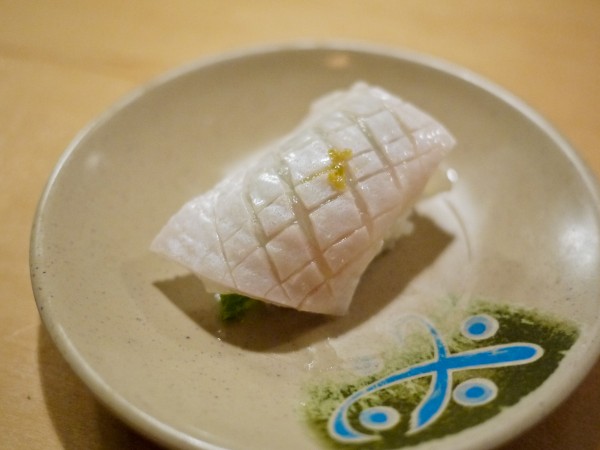 Halibut Fin (Engawa) – This is much different than what we had at Taihei before, with more flesh attached; but Amy doesn’t find this as appealing as the ones we’ve had at Taihei. 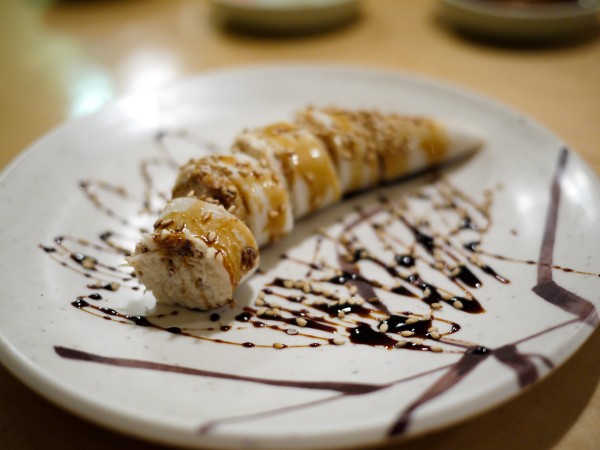 Blue Crab Stuffed Squid – More blue crab meat!!  I love their blue crab meat and it was stuffed inside the perfectly cooked squid, crisp but not chewy.  An unexpected surprise! 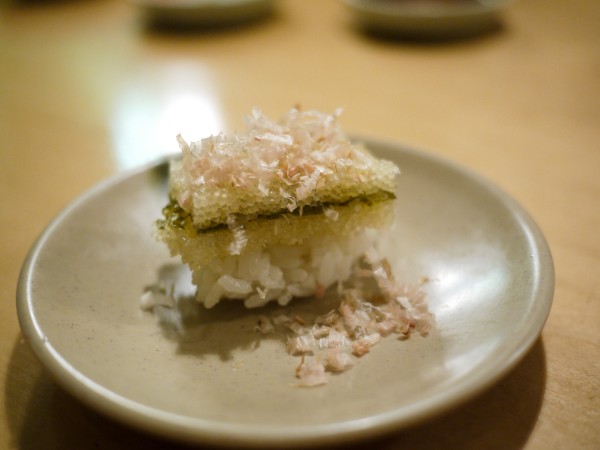 Roe… don’t know what exactly it is but seems to be a bed of roes, this one is so salty – 鹹到阿媽都唔認得…  And after my complain, the chef realize he forgot to wash off the salt, so they didn’t charge us for it. 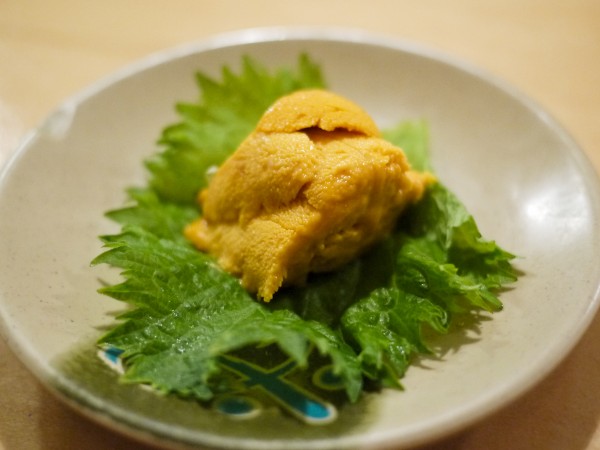 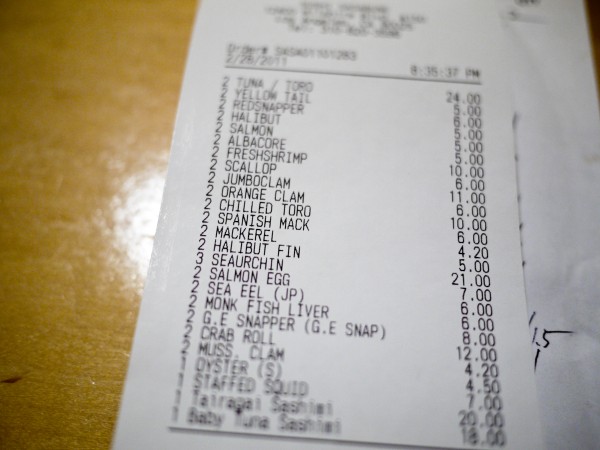 The bill… here comes the damage