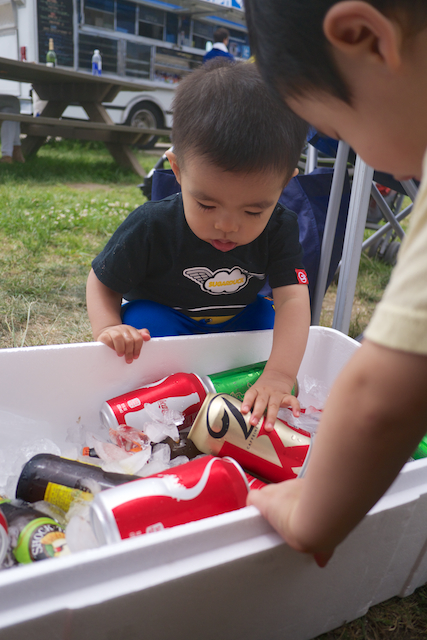 Boxes and boxes of them!

Well…not that much, but we did order about 6 dozen oysters.

Some raw, some on the grill.

Aiden was very interested in the first Chans that came by, because they had bikes.

Aiden is geared up to be safe from the sun’s rays.

Unlike Daddie who got a bad burn and Mommie who had a slight burn on the nose.

Thanks to the worker at The Jolly Oyster to keep the damage down by lending us the “roof over our heads.”

Poor Oyster Shuckers (Galen and Benny) were under the sun! Very big sacrifice!

Even had to bring out some bandaids!

Benny brought things to mix some drinks for the guys.

In the meantime, Timothy cleans the grill!

We brought watermelon juice for the children!

It was a hit by Aiden, he drank over 1.5 Ding Dong watermelon juice!

Dominic had a little and Little Douglas even stole a few sips.

The guys got the Jolly special of course!

After that every dozen of oysters was only $10.

When there were tiny oysters, they’d throw in a few….free!

I’d say all the kids loved this scooter the most.

Thanks Nathan gor gor for sharing!

These $5 knives purchased to shuck the oysters made it difficult!  We’ve heard the $15 ones were of finer quality.

Other than the scooter, the kids also loved the ice chest full of drinks.

They were kept occupied for a good period of time.

Is AIden counting how many drinks belong to him???

Aiden did so much walking that he was feeling a little hot.

Basically, non-stop moving for the 5 hours we were there.

It wasn’t all pretty.

Aiden fell and hurt himself.

We had to put ice on him which stopped the swelling.

We tried to get him to sleep in his stroller during his regular nap time.

But that didn’t happen, so we hurried to rent a ride to take Aiden around.

But we didn’t go far as it was too windy and we headed back to grab Aiden’s sweater.

Good thing Aiden had his blanket.

So we wrapped it around him to keep him warm.

Good thing he wasn’t too tired and was able to enjoy the ride he had been wanting to go on since we arrived.

We passed by Toorima…beep beep.

Jacket all set and we take off again.

But before we can tell the Jason, he went to rent one.

Our photographer followed us along.

So we had to take some photos of his hard work too.

After all we were going at a very slow speed.

Benny wanted us to ride all the way to the Ventura County fair.

We might have gone along with his crazy plan, when I found out a big problem.

The phone in my back pocket…gone.

So we headed back.

Not that Aiden knew or minded.

But I was going crazy inside.

And on the way back….

We found Timothy rented one too!

Hailey and Nathan seemed to be having a lot of fun!

Long story short, phone is found.  Thank goodness Benny added “Locate Me” and we were able to retrieve my broken phone after someone picked it up.  We didn’t end up going to the beach because Aiden hadn’t had his nap yet.  Wonderful day even with the hiccup at the end.