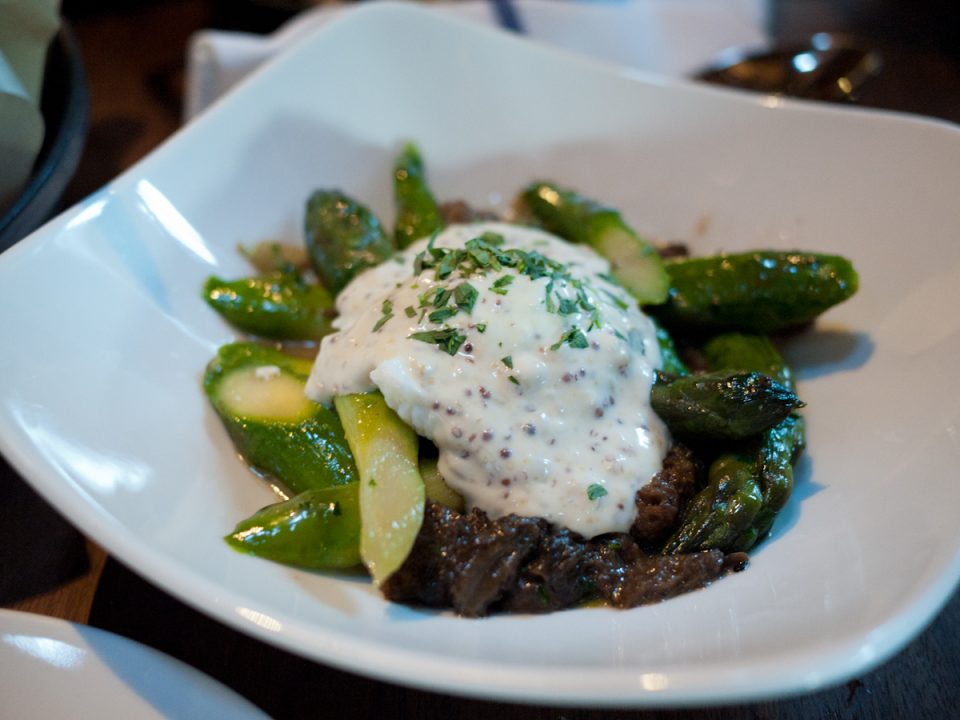 MB Post is a newly opened “Social House” in Manhattan Beach.  Like its name, the restaurant is originally the Manhattan Beach Post Office.  Chef/Owner David LeFevre used to work at the famous Water Grill and left the restaurant back in Sept, 2010 to start on his own MB Post.  (no wonder the food quality of Water Grill had gone down during my last December, 10 visit compare to the Valentine’s day dinner earlier in 2010) 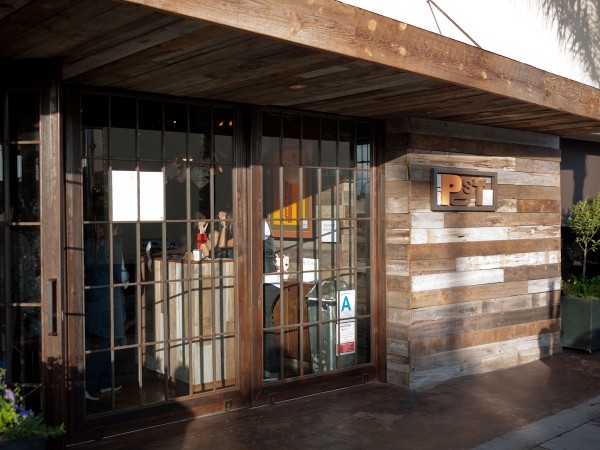 ToORiMa had made reservation a month ago; and it was for 2 Saturdays in a row.  I wonder if he dares to go back so soon.  =X 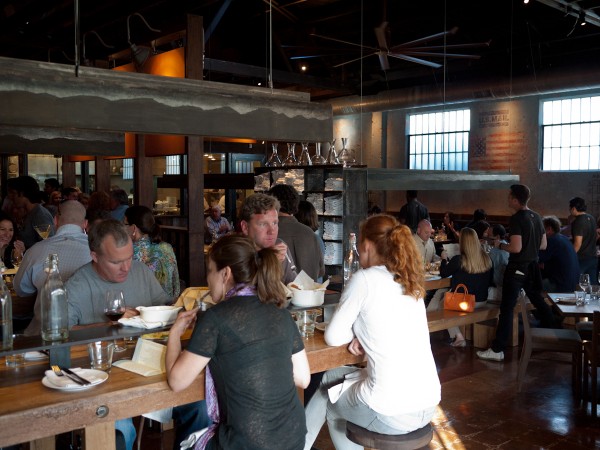 Wow, this place is fully packed.  The bar area on the left occupied about 1/3 of the restaurant space. 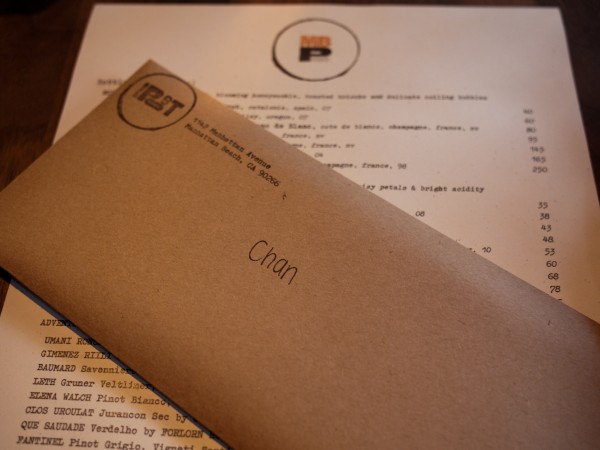 “You Got Mail.”  prompted by the hostess.  She then handed us an envelope, packed with a menu for each guest. 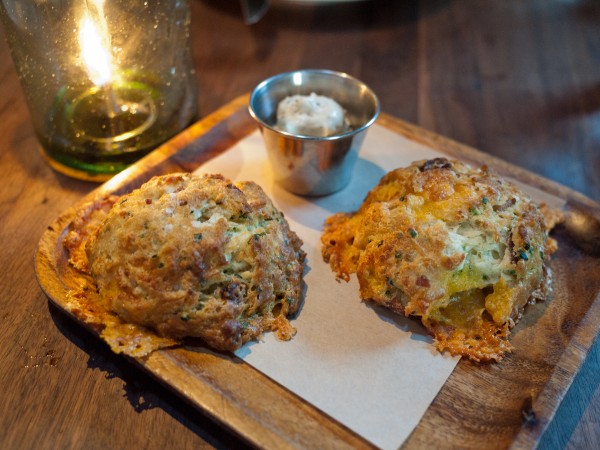 IMO, the maple butter taste better than the biscuit. 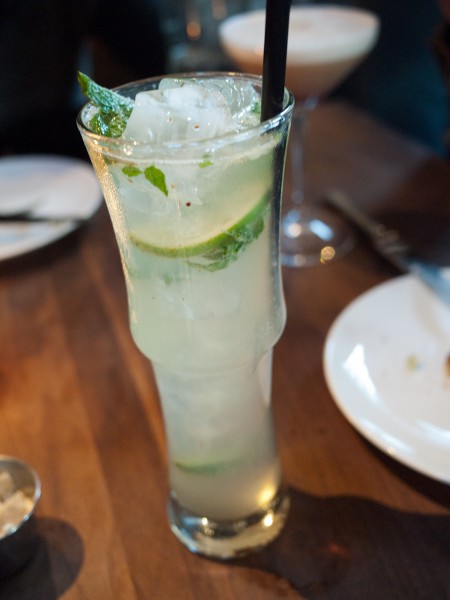 Mo-Pho-Jito – NO, we didn’t order this, they took the wrong order.  Well, later we found out this is not the only thing they got wrong. 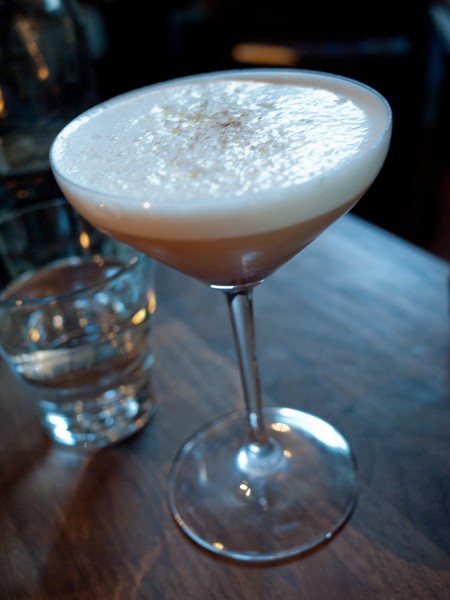 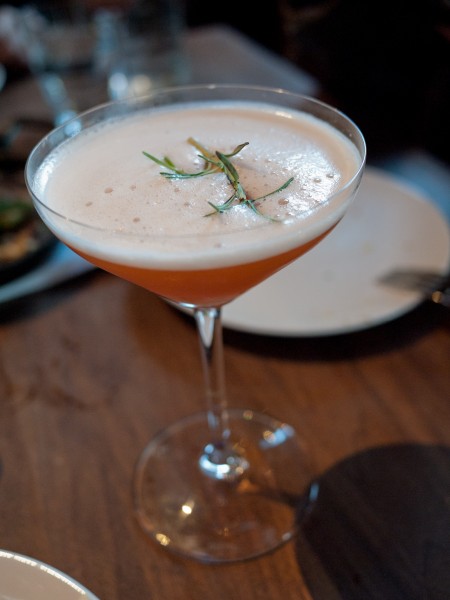 Blister In The Sun

I wanted something and this is recommended by the waitress.  It’s pretty damn good. 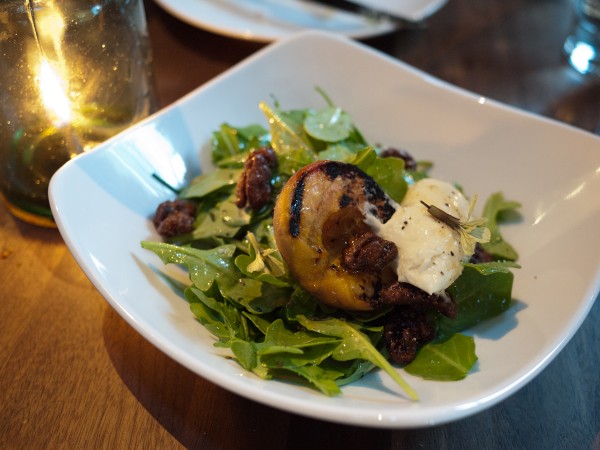 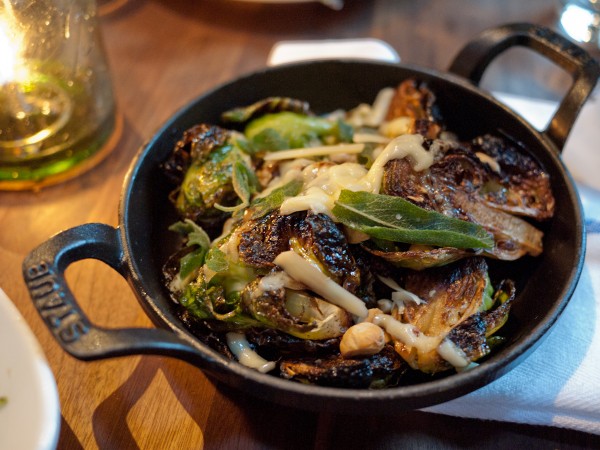 I like it, well, I just love Brussel Sprouts.  Although wifey thinks this was too dried and over cooked. 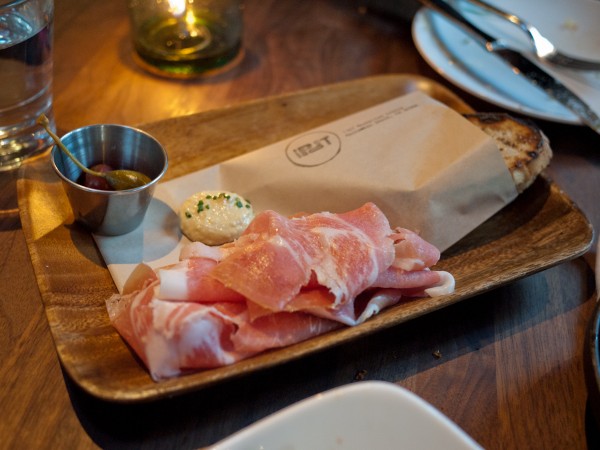 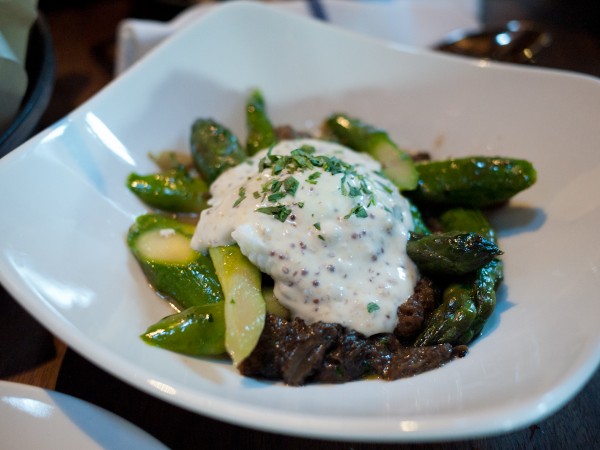 The asparagus goes very well with the poached egg, though the mushroom was nothing special. 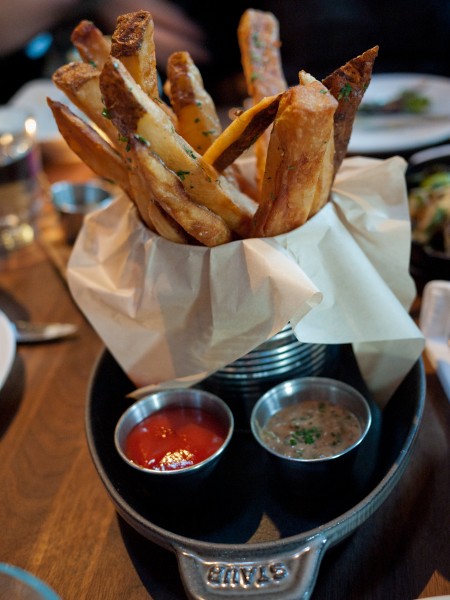 The sauce on the right was awesome, it’s made of mayo, tabasco, chives, and truffle.  Wifey loves it so much and she almost ate half of it and she’s normally not a fries person. 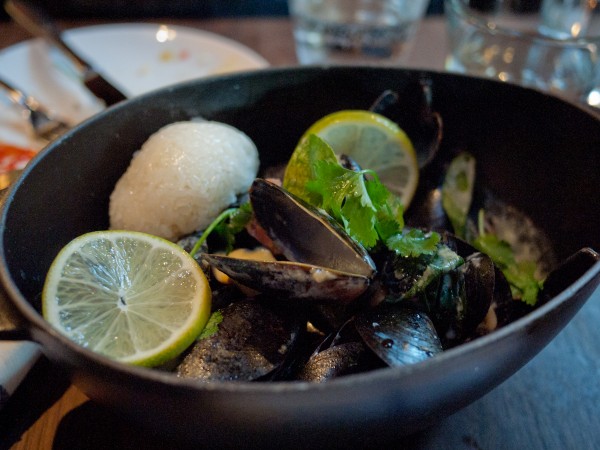 The mussels came in a big pot, and a lot more than it looks in the picture.  Funny thing was I’ve been trying to figure out what was the sauce during the whole dinner and finally realize it was green curry; although the rest of the table already knew about it since it was noted on the menu. haha… 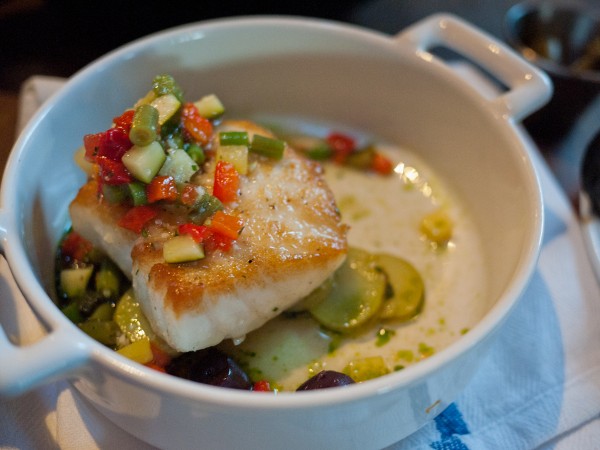 I wouldn’t say this is superb, but this taste a lot better than many high end restaurants. 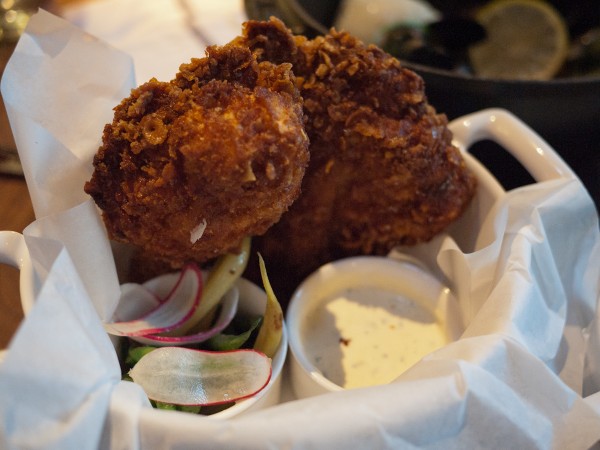 Crispy on the outside and juicy on the inside, the chicken meat was very tender. 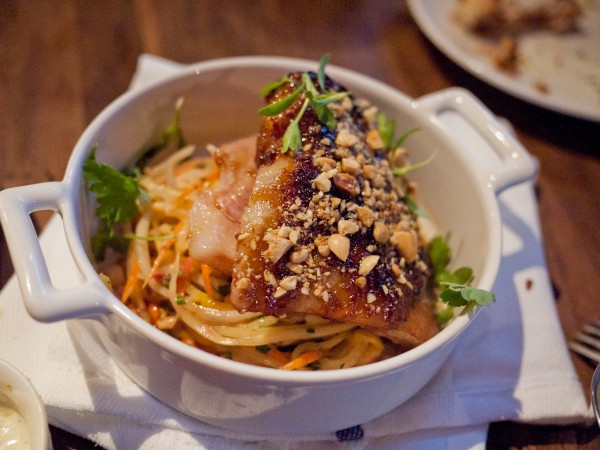 Fat, very fat pork jowl.  ToORiMa finished almost all the fat part and he loves it.  Although I didn’t see anyone touching the papaya salad. 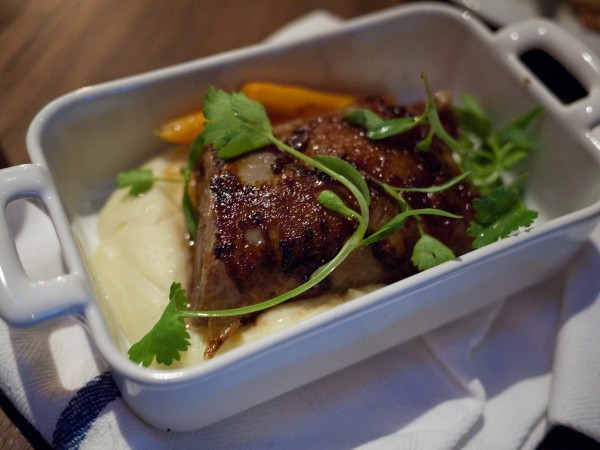 I’d say this is my favorite dish tonight.  The lamb belly was tender and juicy, and melts in your mouth, the aroma could stay in your mouth for a while. 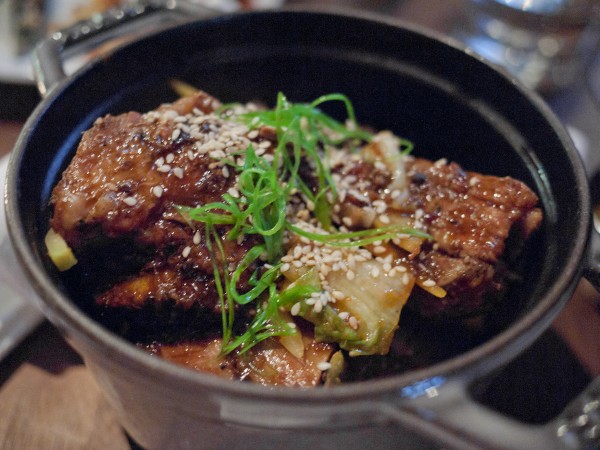 It said kim chi, but I’d say this taste like my mom’s 梅菜蒸鯇魚.  Awwww, I miss her cooking. 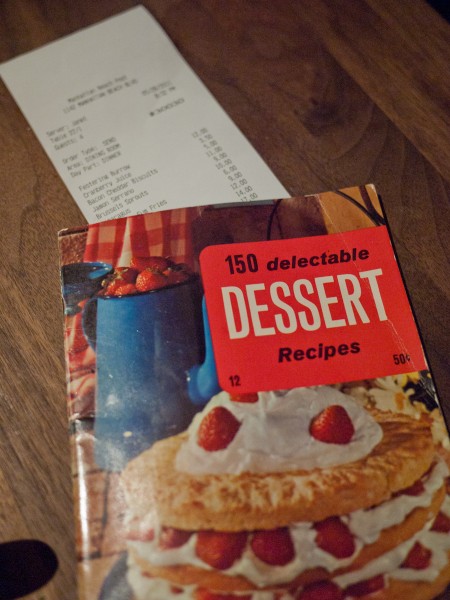 The bill come in this dessert recipes. CUTE. 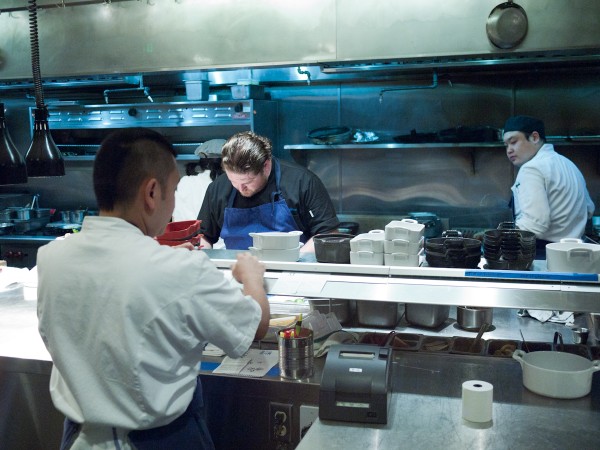 The man in black is David LeFevre.